A bomb has exploded outside a building in the Patissia area of the Greek capital Athens, killing a 15-year-old boy, police say 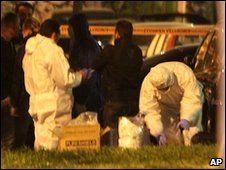 Forensic teams are combing the scene of the bomb attack

The boy's 10-year-old sister was seriously injured and their mother, 45, was slightly hurt, officials said.

Police said the family, all Afghans, were apparently just walking past the building when the bomb, contained in a bag, exploded.

Greek anti-terrorism officers have cordoned off the area.

The device exploded late on Sunday in front of an institute for training public officials. Police said there had been no warning.

Early reports described the victim as a man, but police later issued a clarification.

”We do not know yet about the motive or the intended target. All I can tell you, from what the mother told the police, is that the victim was her 15-year-old son,” police spokesman Athanasios Kokalakis told the Associated Press.

Athens has seen a number of recent attacks blamed on leftist militants.

Bomb attacks earlier this month targeted the home of a Pakistani community leader and the office of a far-right anti-immigration group.

Earlier attacks targeted banks and government buildings and were attributed to far-left or anarchist groups.

Greece has faced severe anti-government protests and rioting since police shot dead a teenager in December 2008.